Detective work: The case of the mystery handknit

Not a lot of posts lately, folks...I've had a pretty wicked case of start-itis, so haven't had a lot of finished projects or new designs to post about. I've also been trying to prioritize work on my dissertation over more "recreational" writing projects. But I wanted to squeeze in at least one last howdy for 2014, and send some holiday-and-new-year best wishes your way!

Since my dissertation deals with evidence in a law enforcement context, I'll get around my prohibition on extracurricular writings by framing this post as a bit of detective work--forensic analysis of fiber evidence, to be exact. :-) Here's the body in question; you'll have to imagine the chalk outline for yourself... 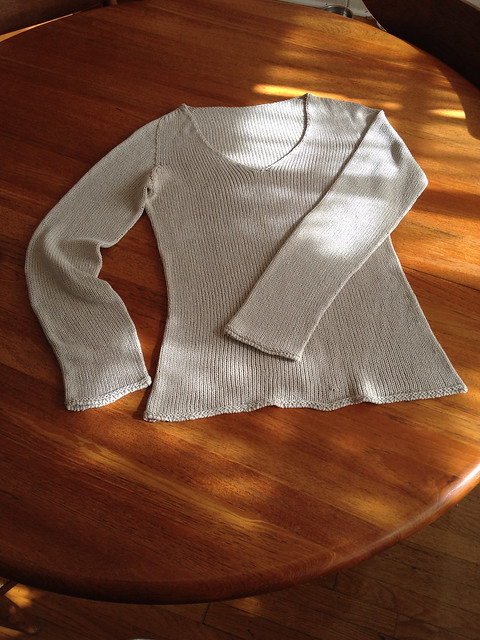 My good friend T. was wearing this sweater when she came over for dinner the other night, and I kept staring at it. It has a strong Eileen Fisher vibe, with its neutral oyster hue, simple lines, and elegant drape. It's far from fancy in construction--mostly stockinette with two simple rows of purled edging at the cuffs and hem--but there were little details, such as the shaping at the waist, shoulder, and neckline, that drew my eye as a knitter. "I think your sweater might be handmade!" I eventually blurted to T. She told me she'd picked it up in a local (LA) thrift shop, twisting around to demonstrate that it didn't have a label in the back neck. When she left that night, she very gamely let me hang onto it for a more detailed forensic analysis, which deepened my initial suspicions. 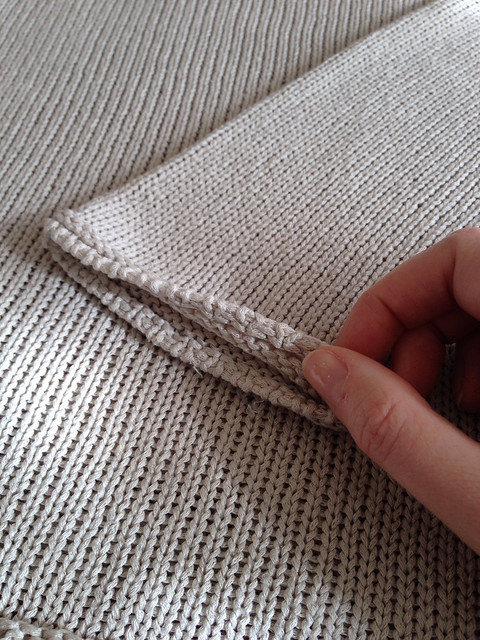 Clue number one: The cast-on. My first impression was that this sweater had been worked seamlessly from the bottom up, so I started by checking out the hems of the body and sleeves, and discovered that they had an unusual-looking cast-on edge. It looked rather like a tubular cast-on, and having done a little bit of trial and error with various methods, I'm now 99% sure that it's the Italian Cast-On with Tubular Set-Up demonstrated in this video tutorial on Liat Gat's KnitFreedom blog. Here's my test version, which is a little fuzzy, but I think you'll find it has pretty much exactly the same appearance: 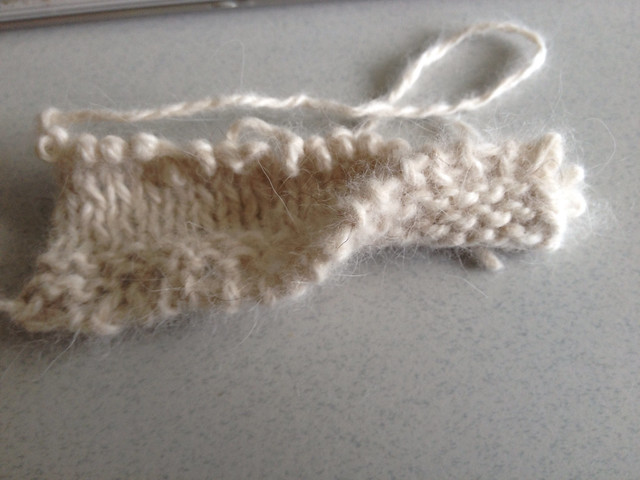 When I went to count the body stitches, I noted that the cast-on edge also had a tell-tale little two-stitch patch of stockinette in the reverse-stockinette rows immediately above the cast-on (probably right at the start of the round). It's not mirrored on the other side of the hem, nor on the cuffs of the sleeves; such asymmetry definitely conveys a handmade feel, as if the knitter was just learning how to use this cast-on method, or perhaps wanted to visually mark the midpoint or beginning of the round. 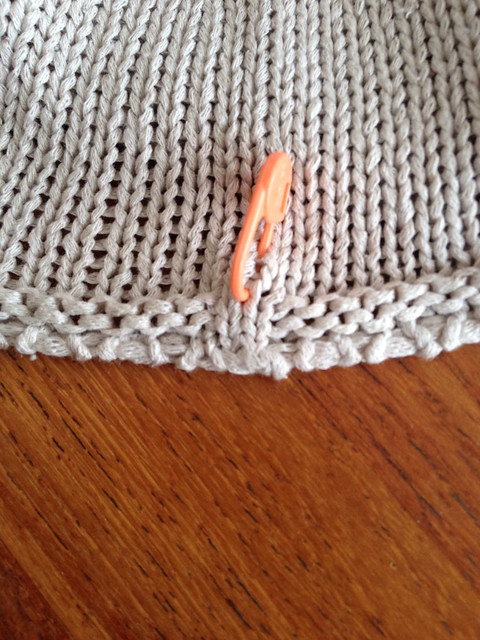 Clue number two: The shaping. Waist shaping on this garment consists of mirrored decreases worked two stitches away from either side of the start and midpoint of the round (as ssk, k4, k2tog). 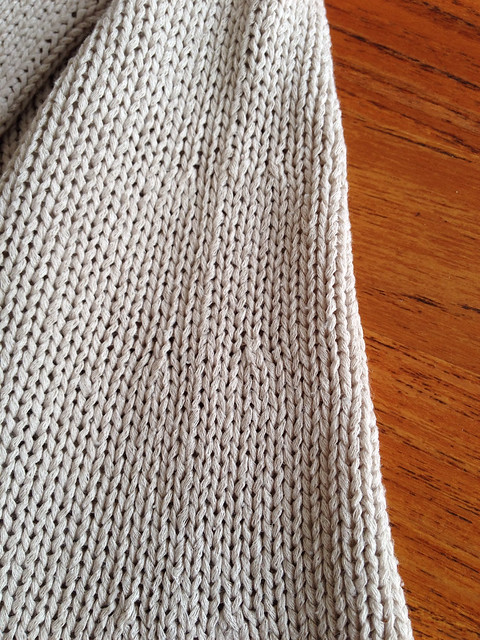 The seamless construction of the body and decreases of this kind aren't unheard-of in machine-knitting, but when it came to the increases, things got interesting... 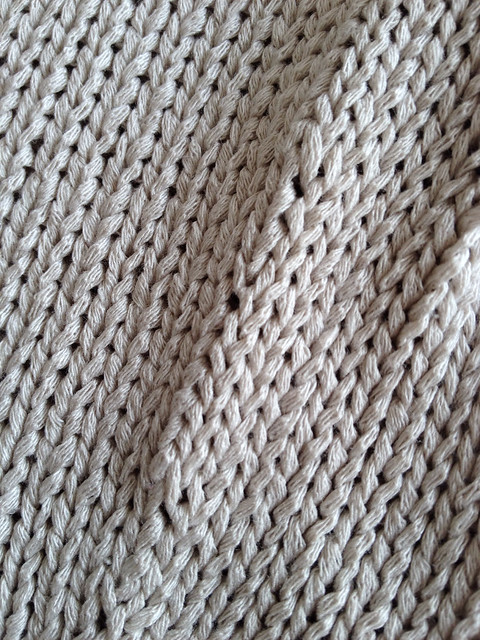 These, my friends, are LIFTED increases--made by picking up the bar between stitches and working it through the back loop. I don't think I've ever seen such an increase in a machine-knitted garment, and it struck me as another distinctly handmade element. The same increases are used in shaping the sleeves, which are also knit in the round with no seam--a further indication of hand-knitting.

Moving on, there's the neckline. The front and back of the sweater consist of an equal, and even, number of stitches (164 at cast-on, to be exact, or 82 each for front and back).  It looks to me like the shaping for the neckline begins five rows after the sleeves are joined, and was worked as follows:

Does it look that way to you, too? 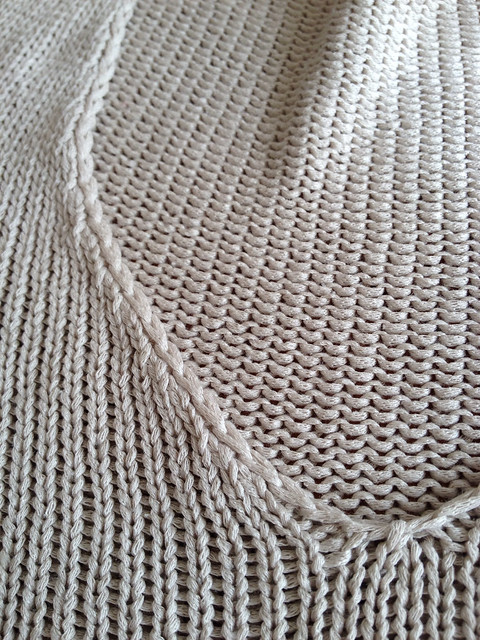 Next there's the shaping where the sleeve is joined to the body and the sleeve cap and underarm shaping are all done seamlessly. These look handmade to me too, for sure. 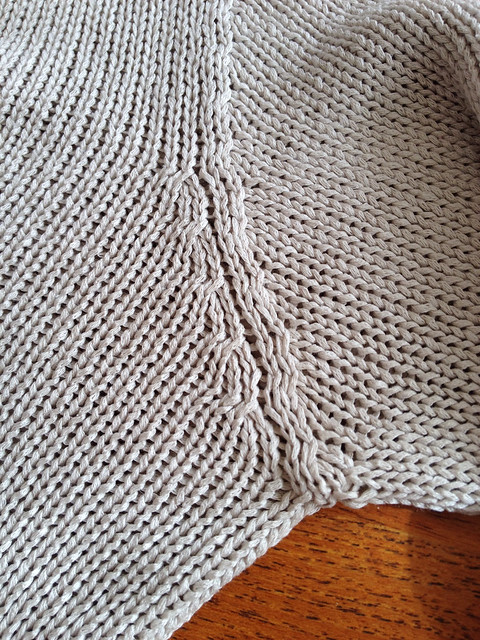 Ditto for the narrow, four-stitch shoulder saddle and associated shaping. 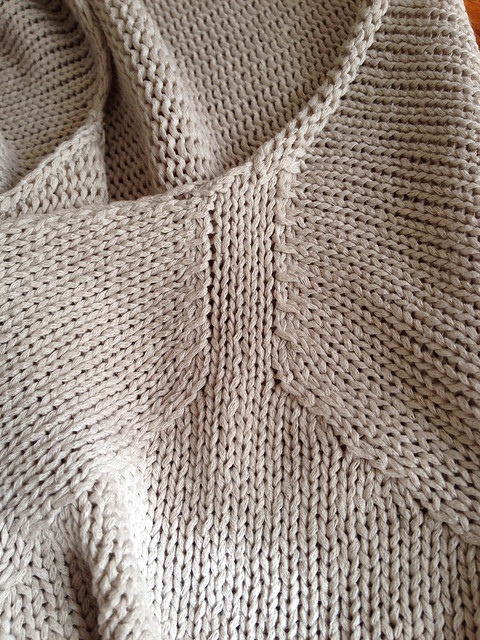 Clue number three: The finishing. Here's where the case for handwork is somewhat less definitive in my mind. Even though the whole point of seamless construction is to minimize finishing, you're always going to have a few ends to weave in--not just from the cast-on edges, but also where the sleeves are joined to the body, and wherever you join a new ball or skein of yarn. The way someone weaves in their ends is highly personal, too, so I was really expecting this to be a clincher. (I can't tell you how many discussions I've had in knitting circles about people's preferred methods, time-saving tricks, or confessions that "I just knot the ends together and trim them. If I had to weave everything in I'd never finish anything.") When I turned the garment inside-out to look, though, I found no joins whatsoever in the body--meaning over two square feet of fabric were knitted from a single, continuous length of yarn. Hmm! Unusual, but not impossible, if you have access to big skeins...

The ends at the underarm joins were really simply and unobtrusively finished, too--in fact, at first glance, I couldn't see how these short little ends were kept so tidy. 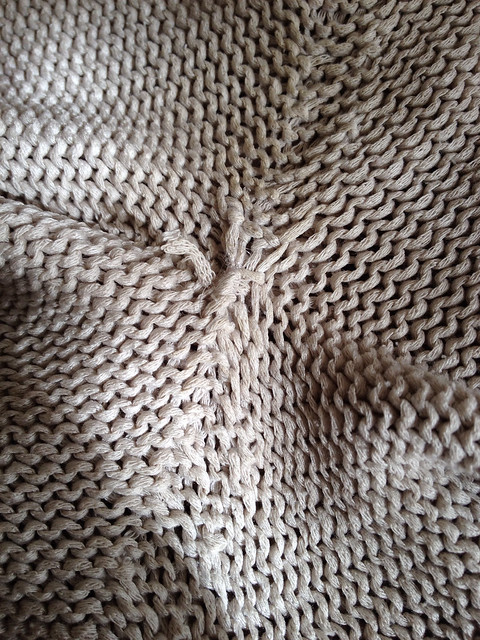 Let me digress for a minute here and talk about the yarn, which is probably significant enough to be designated Clue number four...and a very mystifying clue that is, too. A close look at the exposed end there in the underarm confirms that it has a chainette construction, not plied (although looking at the knitted fabric, I initially though that it was a plied yarn with a very low twist). It has a dry, crepe-like hand, and is knit at a pretty open gauge that gives it a nice fluid drape. I noticed in closeups that it has just the slightest tendency to pill in the way characteristic of cotton; however, it also has a little bit of sheen, which suggests either a synthetic or maybe a touch of silk. The dry hand certainly calls to mind that of a raw silk, but it doesn't have the squeak of a pure or high-silk-content blend. My best guess so far, without the aid of microscopy, is that it's a DK or light worsted-weight cotton-linen-viscose blend.

There are quite a few such blended-fiber chainette yarns on the market for handknitters--although the vast majority are sold in 50g put-ups, which would have required joins somewhere in the body for sure! Chainettes can't readily be spliced invisibly like plied yarns can, and neither can cellulosic fibers like cotton and linen, which don't felt. This garment was almost certainly made with three long strands (two for the sleeves, one jumbo-length one for the body), not of seven or eight 50g balls of something (I haven't yet weighed it, but I will--I'm guessing it's close to 400g). But then again, you can see in the fabric here and there an occasional little loop from a split strand--less likely in machine-knit fabric, but a regular occurrence for even the most meticulous handknitter. Hmmm again! 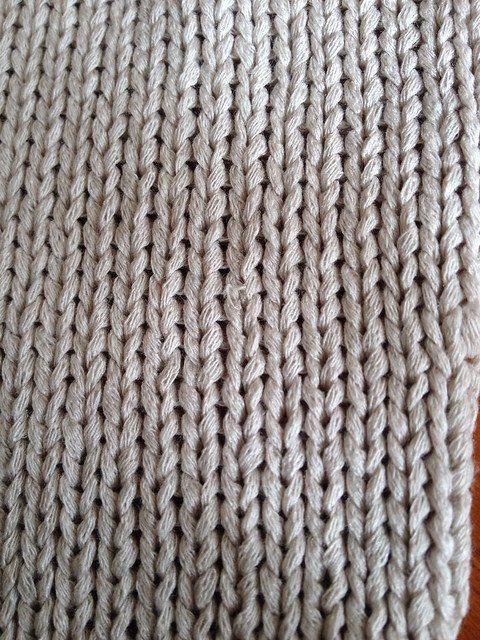 Back to the finishing question, though. Looking at the back neck edge to see what kind of bind-off and finishing technique was used there, I happened to see a wee filament sticking out around the yarn end. It was partly unravelled, so I carefully trimmed the loose portion (no, reader, I did NOT pull it! Tempting, but NO). It turned out to be some kind of transparent monofilament, which, upon close inspection, was wound around the ends at the cast-ons and underarms, too. (Look closely at the underarm seam image above, and you might be able to just make it out there.) Curiouser and curiouser! 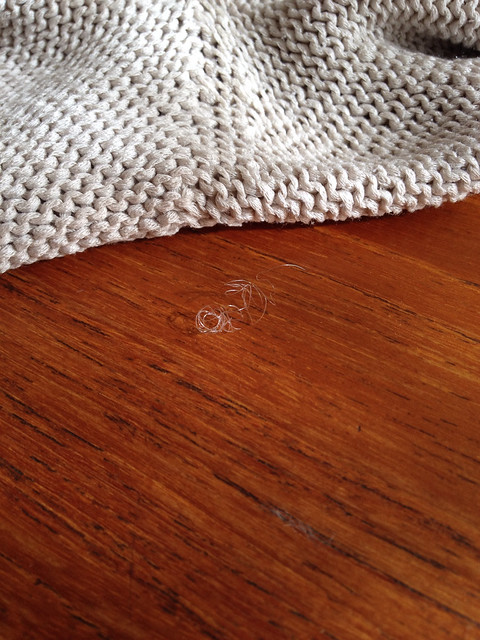 I have searched the Ravelry forums at some length, and the only people who are talking about monofilament seem to be weavers and spinners, not knitters. I don't personally know anyone who's using this as a finishing technique for ends, although it's certainly an effective one (those ends ARE nice and tidy!). It is an unusually soft and fine variety of monofilament--not stiff or scratchy like fishing line. It may be a specialty product, but it's not one I'm familiar with. This one little piece of the puzzle is the bit that makes me most perplexed about whether this is, in fact, an entirely handmade, one-of-a-kind garment, or a high-quality piece of manufactured goods, perhaps with a handknit component.

As with some of the cases I observed while doing fieldwork with CSIs for my dissertation, the forensic evidence is compelling, but not 100% conclusive. Some elements of mystery remain here; perhaps someone out there has answers. Knitters, do you know anyone who uses monofilament to finish ends in their handknits? Do you recognize this yarn? Did you (or some knitter you know) make this garment and then donate it to a thrift shop in southern California...or give it to someone who would have? Have you perhaps seen an identical garment on the rack in some high-end boutique somewhere? Write and let me know!

If this WAS something you (or a knitter you know) made, you might be happy to hear that it is now T.'s favorite sweater--she said she's been wearing it pretty much nonstop since finding it in that thrift shop. So, I'll be working on a reverse-engineered copy of this simple but beautiful garment for when she wears the original out. Stay tuned for a post on that project in 2015, and in the meantime, have a great holiday season!
Posted by TT820 at 4:01 PM

Really enjoyed this post – please keep us updated. Happy holidays to you!

TT - fascinating story, here, you could write a mystery novel I'm certain. Re that monofilament - could it be invisible thread? In the sewing world there are sewers who use invisible thread mostly to hide stitches on the outside of the garment, say over decorative trim.

Also the pattern, have you had any luck finding on Ravelry? Your friend who picked up this sweater...there's likely to be another there, usually people don't donate just garment, there are at least several...so your friend should return ASAP to that shop to see if there's more!

It's Serial for Knitters. Nice post, SB. Miss you! xo. 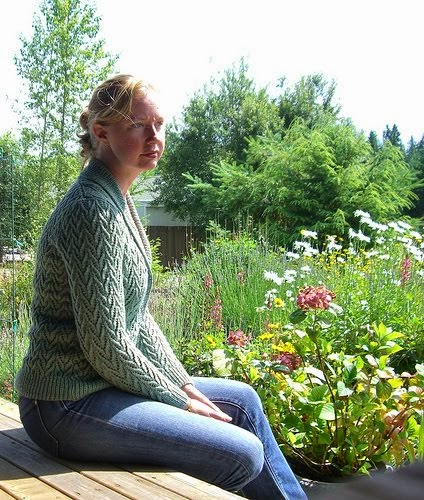 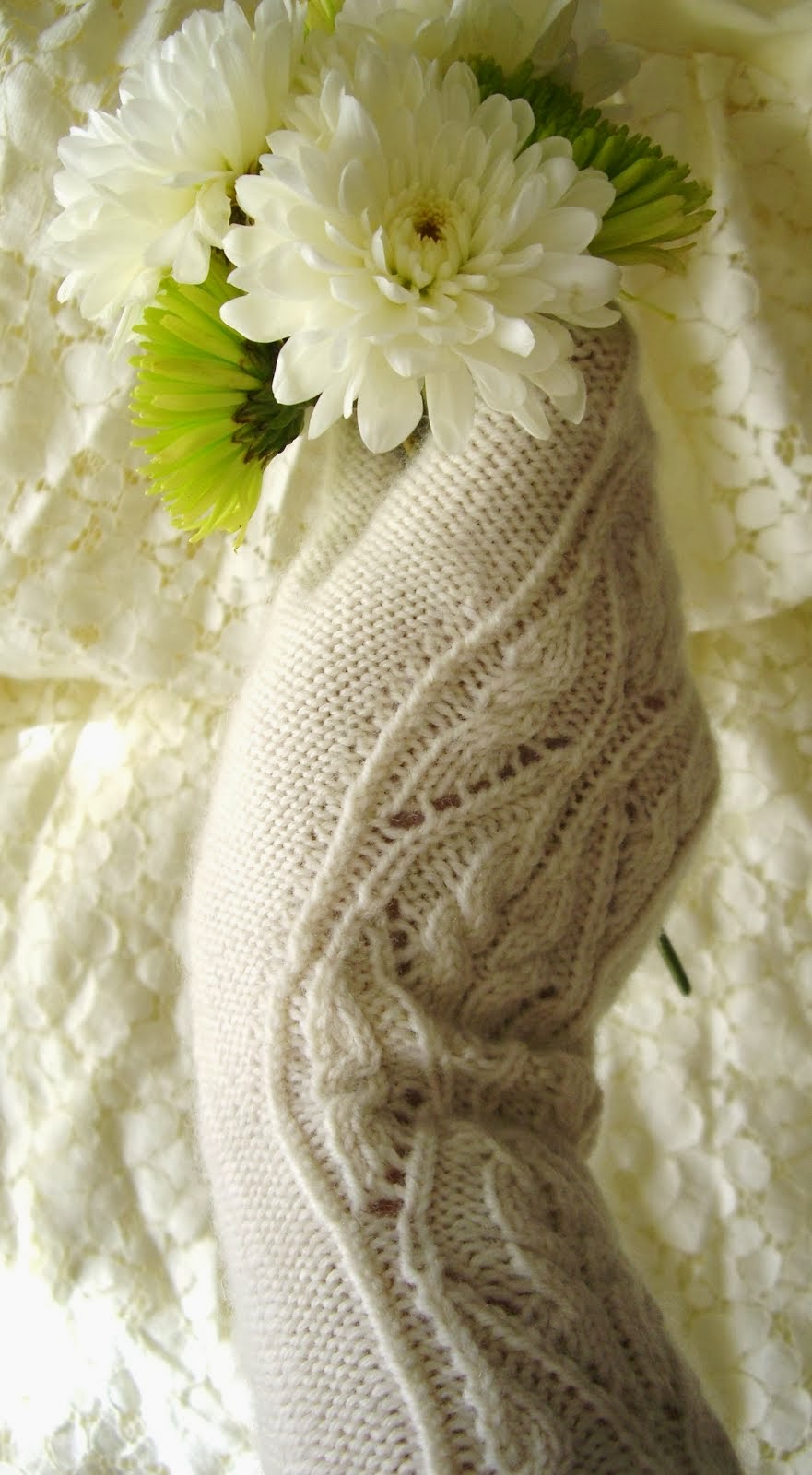 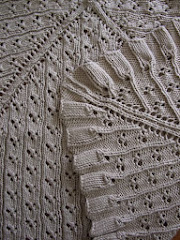 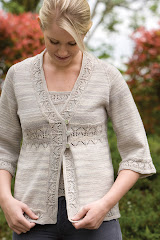 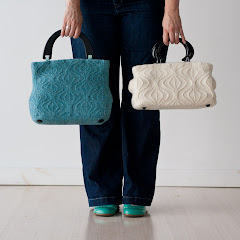